OS 55HZ-R DRS Heli Engine - A state-of-the-art power plant for serious heli pilots!
The 55HZ-R DRS engine is designed to meet the unique demands of F3C competition and 3D flight!
The O.S. 55HZ-R DRS is developed for supplying ideal air-fuel mixture as pilots desire.
A fuel tank is pressurized by the pressure from the nipple in the back plate via one-way valve so that the fuel is pumped to the regulator. The regulator picks up the negative pressure created in the venturi and supplies fuel consistently by controlling check valve according to carburetor opening. The carburetor is equipped with two needles to adjust middle and high speed precisely.

DRS system delivers fuel to the regulator under constant pressure for precise fuel delivery throughout the entire tank from full to empty Mounting position of DRS is perfectly in line with the carb for consistent operation in all attitudes of flight Same mounting bolt pattern as the OS 50SX-H Hyper Dual needle 40L-R carburetor allows independent adjustment of idling, hovering and high speed with four arm throttle lever for use with a variety of servo brands
HZ Hyper low profile six fin cylinder head

The latest DRS system (Demand Regulator System) uses a crankcase pressure tap-off to pressurize the fuel tank via a one way valve. The pressurized fuel is then carefully regulated at the carburetor to provide the optimum mixture no matter what demands are placed on it. This is done by using the negative pressure in the carburetor venturi as part of the regulation system.
The carburetor itself has three mixture controls for low/mid and high speed settings. Once set for the fuel demands of your model/type of fuel and muffler, there is rarely any need to change those settings again.
The main mechanics of the engine itself are the same as the regular Max 55HZ. 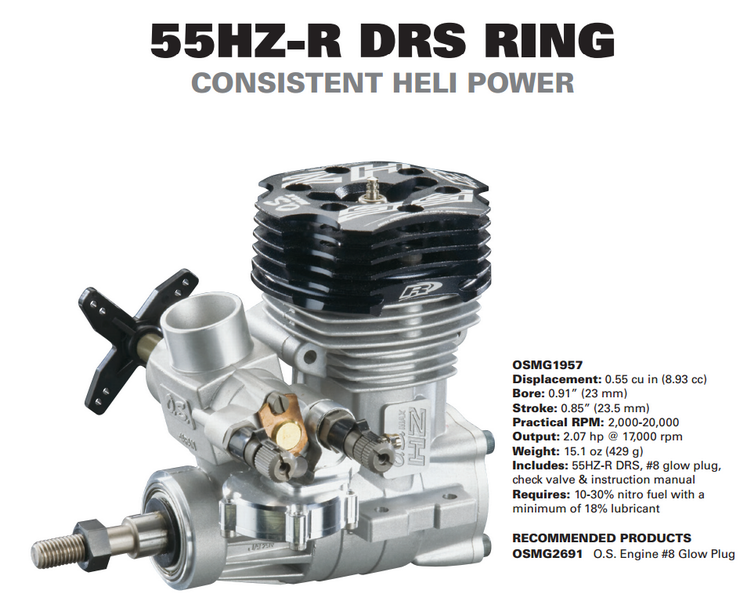 Draw products in this panel or use the corresponding buttons [Buy now] to fill your basket.